(Written September 6, 2011)
Today I met my brother’s baby... another girl, ten years younger than her sister.  Combined with two stepdaughters from his wife’s first marriage, this makes four.  Four girls...  Four girls in one house!
Can you imagine?
Yikes!  The dresses, the hair bows, jewelry, perfume, hats, scarves, tights, leggings, socks, shoes, slips and unmentionables, jeans, coats, purses, gloves...
The ballet lessons, modern dance classes, soccer, piano, singing, T-ball, modeling, glamour shots...
And then they start Kindergarten!
Something is missing.  This exclamation is long overdue.  I started writing this last night about yesterday’s revelation.
But this should have been written nearly four decades ago.  Yes, my niece is 39 and will turn 40 in a few months.
Thanks to Facebook, Andrea (she said, “Call me ‘Andy’”) and Aunt Patty have been reunited... or should I say... united?  There’s no “re” about it.  None.
For whatever reason, although my folks and I were made aware of the birth of this precious angel from heaven in January 1972, we were never allowed to meet her.
Born near San Diego, a mere 140 miles from my home at the time, my little niece never knew her aunt existed.  Worse yet, she never knew she had doting grandparents.
So sad... so tragic... I found out yesterday that she was told her grandparents (my parents) and her aunt had no use for her or her family (including her father) after they were able to bear their own child.
You see, my brother was adopted.  My parents “picked” my brother when he was in-vitro.  They heard of this poor young couple who were expecting their fifth or sixth child, and the mother was a mere 19 years old.  This was about the beginning of World War II.  Times were tough, but they were thrilled at the thought of becoming parents.
And one day, after going to the doctor with continual stomach pains and nausea, my mother announced to my father that it wasn’t the flu – she was pregnant! My brother was thrilled!  He was going to be a big brother.
My brother married at a very young age and he and his wife had a baby girl.  Sadly, the marriage didn’t last long.  Another marriage, another failure.  A third marriage... and my second niece!  And shortly thereafter, another baby... again, a girl!
Sadly, my brother died in an accident just three days before my second child was born.  With little to no communication with his widow, we were left wondering about these two little girls.  Would we ever see them?  Did they even know we existed?
Somehow... and I don’t recall how... my brother’s first daughter had contact with him and his family.  She had met her two older half-sisters when she was about ten.  And one day she was contacted by one of these girls and found where her younger half-sisters lived.
Although I’ve kept in close contact with my oldest niece over the years, Andy chose not to be found.  She finally did make contact with her step-sister some time ago, but refused to acknowledge that she had grandparents or an aunt.  Unfortunately, her grandparents died sixteen years ago and they never had the chance to meet her.  It was because she had questions that she contacted me.
(Written October 25, 2011)
Andy, who lives in Texas, told me a couple of weeks ago that she was going to be visiting her friend in Portland this week.  This was my chance.  I’ve waited nearly 40 years for this day.  I left at 8:00 this morning and arrived in Portland shortly after 11:00.
Today I met my brother’s baby...
Posted by Sister Patty at 7:21 PM 3 comments:

Promote Your Page Too

Have you ever been to SISTERS? We’ve been in the same complex since 1997 (and we’ve been around since the early ‘90s). It’s a little shop on the corner, right next to the antique mall. With all the windows, it's nice and bright and full of treasures (all the better to see them, my dear!). We have a great outside area, all covered and full of vintage outdoor furniture, plants, benches, pottery, ladders, doors and more.

SISTERS is definitely one-of-a-kind! We are always seeking the unusual antique and item of interest. What are you looking for? Let us know… it just might be in the back room or the barn. We’ll find it for you! 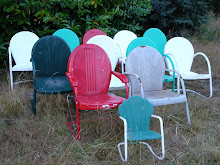 My love affair with motel chairs...

Enjoy my photos, descriptions, images, product names and text in general; but pretty please, do not copy, reproduce or otherwise use them without my written consent. All content on this blog is the sole property of Sisters Inc., Antiques, copyright 2007 - 2012.